Arteriovenous malformations (AVMS) are tangles of dilated, thin-walled blood vessels that occur anywhere within the brain or on the dura mater (the covering of the brain). If an AVM ruptures, it can cause a stroke, brain damage, or death. AVMs occur in less than 1 percent of the population (300,000 Americans) and are more common in males than in females. On average, there is a 1% per year likelihood of intracranial bleeding. Patients can have no symptoms or may present with headaches, seizures, or progressive neurological loss of function. If a hemorrhage occurs, the patient may experience severe headache, stroke-like symptoms, or loss of consciousness. Upon arrival to the hospital, patients will be stabilized, undergo CT and be admitted to the intensive care unit. An angiogram is often performed to identify if there are any urgent attributable risk factors for bleeding that merit earlier rather than later treatment, such as an associated aneurysm.

Treatment of AVMs may include observation, embolization, radiation treatment or surgical excision. In many cases, embolization is used to decrease the blood supply to the AVM to make it safer for a more definitive treatment such as surgical excision or radiation treatment. Before a patient is treated he or she may undergo a series of tests such as MRI, functional MRI, CT, and CT angiography. A multidisciplinary team of physicians including a neurointerventionalist, neuroradiologist, neurosurgeon, and stroke neurologist carefully review this data to propose the best plan. 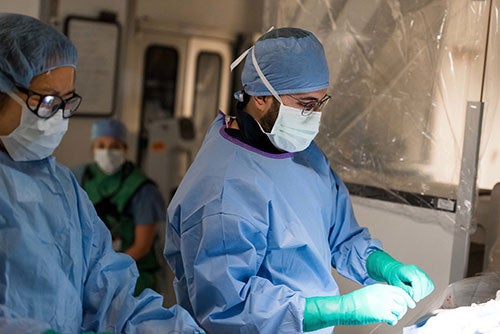 Embolization is performed under general anesthesia. An artery in the groin is accessed with a catheter, and brought up to the neck to take pictures of the arteries going to the brain. Using this map, a smaller catheter is placed through the guide catheter in the neck, and navigated into the arteries supplying the AVM. Liquid embolic agents are then injected, such as ONYX or N-butyl cyanoacrolate in a mixture with radio-opaque material. This process is repeated after which the catheters are removed. The patient is awakened from anesthesia and transferred to the Neurointensive care unit for careful monitoring of his or her blood pressure and neurological condition. Patients are usually in the hospital for elective procedures for 3 days.

Blood flow to the AVM may be treated in stages to prevent thrombosis or hemorrhage from occurring. In some cases, embolization alone may fully treat a lesion, but most patients will require adjunctive surgical resection or radiation therapy.